A few years ago — it seems longer — before Donald Trump declared his candidacy, I happened to visit Trump Tower.  My great nephew Hogan’s high school choir toured New York City and sang at various public venues, including the vast pink marble atrium at Trump Tower Fifth Avenue, Manhattan.  Hogan’s mother, a couple of my sisters, Roxanne and I all went to New York to hang out and to catch the choir at some of their gigs.

If not for Hogan’s choir I would have never thought to set foot in Trump’s Tower.  Years before he was president he accrued a reputation as a sheister, cheater, deadbeat con man, and this 58 story monument to the guy’s overpimped ego seemed like a waste of valuable Manhattan time.  There’s so much else to dig about New York City, why not walk the Brooklyn Bridge, visit the Metropolitan Museum or ramble through Central Park instead.  The idea of paying any tribute to a man I knew to be a moral dirtball by gracing his headquarters seemed like endorsing a temple to the devil.

I was especially peeved with the place from one of the legends of how it got built on the site of an old-timey family owned department store, Bonwit Teller, which had to be torn down.  Trump had originally agreed to remove and preserve architectural artwork from the old building, giving it over to the Metropolitan Museum for preservation, but he reneged in the end.  To cut construction costs he had the demolition crew lose or destroy the artwork, saying he got a lowball appraisal for their value and made the decision they weren’t worth preserving.  Without anything in writing having anything to do with the Metropolitan, the artworks disappeared.  Not saying the quality was on par with the Elgin Marbles, but the loss to New York seemed cruel at the time and I carried that grudge among many against Donald Trump.  I always wondered who eventually took possession of the Bonwit Teller artwork, or if like some nazi fuhrer and final arbiter of taste he really did have them destroyed.

So when we learned Hogan would be singing at Trump Tower, the power of family trumped any trepidation I or the others had about the guy or his place of headquarters, we had a legitimate reason to be there.  We arrived way early to scope the place out and get good seats.  We came in at street level Fifth Avenue — you know, that avenue Trump said he could shoot somebody and get away with it — and I have to say the first impression of the lobby inside the door truly blew me away.  The height and grandeur of gold and glass and sleek pink marble immediately resolutes the sublime.  The towering walls of the sunken and rising eight story atrium resound in rosy pink marble with white veins, the stonework like a luxury fortress of sweet candy pinkness, a little waterfall at one wall.  We found the Trump Bar not crowded and got seats on a balcony overlooking the floor of the atrium where the kids would assemble.  To our utter shock the drink prices were reasonable and we ordered some cabernets and sodas.  Parents and friends of the kids in the choir who were also following them around showed up at the bar and we watched as the kids showed up in their tidy uniforms, set themselves up on the risers and arranged their little orchestra while the adults in their troop coordinated their whereabouts while we sipped our wines and cokes and looked on from above in our celestial pink opera boxes. 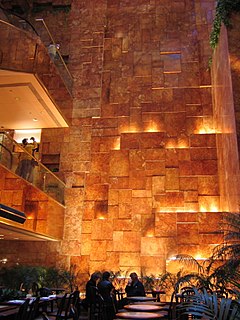 The choir sang like angels.  Enhanced by the acoustics of the pink marble their voices literally shone like gold.  Passersby stopped to watch and listen.  The friends and family with the bar’s eye view were enthralled and proud of their kids stopping foot traffic in New York.  We were proud of our Hogan.

I came away from that experience rather amazed at the effect Trump Tower had on me.  The ethereal feeling those rosy pink atrium walls had on me had me spooked with a kind of voodoo rush of pleasure and polysymmetry I could not forget.

Years later, Trump held a news conference on TV from the Trump Tower atrium — the very news conference after the confrontation in Charlottesville where Heather Heyer got killed and Trump said there were fine people on both sides.  TV cameras don’t see light the same as the human eye.  We see light and color and reconcile it in our brains as to how it should appear, all in real time so to speak.  TV sees light and color calibrated to the light source — sunlight, tungsten, florescent, LED, halogen for example.  Colors are calibrated for TV to coordinate primarily to normalize skin tone.  Where that affects a punkin-faced subject continues to challenge production engineers to this day.

What I saw at the press conference were the walls in the background.  What I remembered as vibrantly joyful pink walls looked instead like shit.  The marbled pattern on TV looked like the walls were smeared with feces.  The color of brown poop.  The rich textural pattern of the marble looked caked with crap.  Excrement.  Smeared with it.  Dripping with diarrhea.

I’m sure this evident perception is not lost on Donald Trump, who is so savvy about television.  It’s ironic that his iconic tower so cleverly designed to look so cool in real life looks like a shit hole on TV.  His organization doesn’t do news conferences from the Trump Tower atrium anymore because the walls look like doodoo on TV, and they know it.

Technically the color could be corrected but the resulting skin tones would really freak you out. 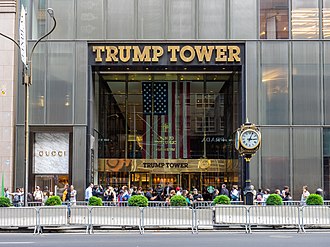